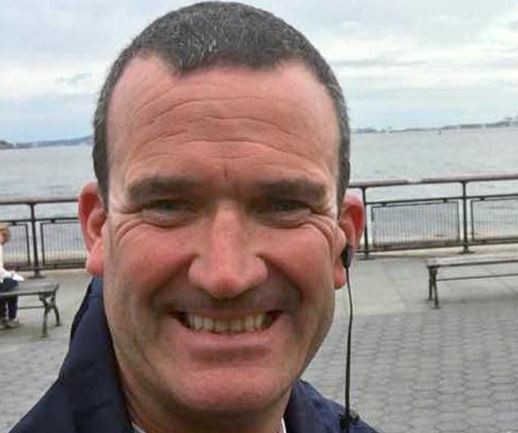 After terrorists struck the World Trade Center on September 11, 2001, a New York ferry captain who later became a city firefighter helped evacuate hundreds of people from Lower Manhattan. He was Thomas Phelan, 45, one of the many heroes who came to the city’s rescue after the attack. Phelan died on Friday, authorities said, one of the thousands of victims of cancer linked to the 9/11 attack.   Phelan worked for Circle Line Statue of Liberty ferry cruises when the twin towers were hit and helped ferry people from Lower Manhattan, FDNY spokesman Jim Long confirmed. In 2003, Phelan joined the fire department as a firefighter and eventually was promoted to marine pilot, Long said.

Mayor Bill de Blasio praised Phelan’s heroism and mourned his death in a tweet. “In our city’s darkest hour, @FDNY firefighter Thomas Phelan’s heroism saved hundreds of lives,” de Blasio said. “We will never forget his service and his sacrifice,” he said.   Thousands of people have been diagnosed with cancers linked to the 9/11 attacks, according to the Centers for Disease Control and Prevention’s World Trade Center Health Program. Many of the cancer diagnoses are believed to have resulted from exposure to known and suspected carcinogens and pollutants after the attacks.

Among the victims are first responders, emergency responders, recovery and cleanup workers, and volunteers who helped in the aftermath of the attacks on the World Trade Center, the Pentagon and the crash site near Shanksville, Pennsylvania. Others lived, worked or went to school near the World Trade Center on September 11 or in the subsequent months. Several people in the program have been afflicted with more than one type of cancer linked to 9/11.

Jackie Chan Pledges To Give $150,000 To Anyone Who Finds A Cure For The Deadly Coronavirus

Trump Pulls Back From War With Iran

Iran vs US: America reportedly withdraws troops from Kuwait

Iran: US Warns Citizens Against Traveling To Nigeria

7 TYPES OF TOILET INFECTIONS: ITS SYMPTOMS AND PREVENTION

Fulani Herdsmen are the most hardworking Nigerian,No Sbsidy from Govt yet...

Ekiti Guber: Any Muslim that vote for PDP is on his...

2019: CAN, Atiku, Buhari meet behind closed-door

I don’t take nonsense, probe me and tell the world who...

Before I will be jailed, I will Expose the hiding truth...

My Children Are Hard Working, At Least They Cleans My Office...

ABOUT US
Exclusive103.com is your gallant news out-let that informs you all you needs to know about daily worldwide breaking news.. Its not news unless it from Exclusive103.com
FOLLOW US
© 2017 - Exclusive News 103
MORE STORIES